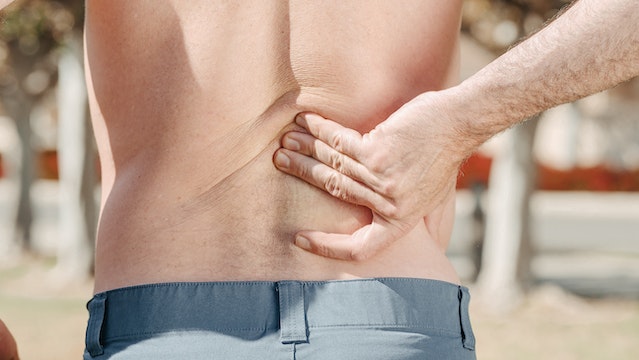 Back discomfort is frequently caused by a herniated disc. This occurs when the soft middle of a spinal disc slides out of its shell. This can cause pain, numbness, or paralysis in the limbs by affecting adjacent nerves.

Some people have little discomfort from a herniated disc, especially if the disc is not pressing on nerves. The disease is also known as a sliding disc or disc prolapse.

Although it can be excruciatingly painful at times, a herniated disc offers several potential therapeutic options. Symptoms usually subside or disappear after a few weeks, but you may require surgery if they continue or worsen.

The causes, symptoms, and treatment of a herniated disc will be discussed in this article. It will also go through the risk factors for disc herniation and techniques for avoiding the problem.

A herniated or slipped disc develops when part of the soft interior component of a spinal disc (the nucleus) slides out via a fissure in the fibrous covering of the disc. This usually happens in the lower back, although it can also occur in the cervical and middle back spinal columns.

A herniated disc is often caused by progressive wear and overuse due to repetitive movement over time. In addition, spinal discs get drier and weaker as people age, increasing the likelihood of a herniated disc.

Some medical factors, such as spinal stenosis and connective tissue abnormalities, might increase the risk of disc herniation.

The escape of the inner part of the disc releases chemicals that can irritate neurons in the surrounding region, resulting in inflammation and discomfort. Herniated discs can also put a strain on nerves and produce discomfort by compressing them.

A person may not have any symptoms in some circumstances. However, some typical symptoms include the following:

The symptoms of a herniated disc might also vary depending on where the issue is.

A significantly herniated disc in any area of the back might produce bowel or bladder control issues. When a person experiences back pain and unexpected changes in bladder or bowel control, it is typically a warning that immediate medical assistance is required.

The majority of people suffering from herniated disc symptoms will recover on their own. However, it may take up to 12 weeks.

Most of the time, symptoms may be resolved by avoiding painful movements and according to a doctor’s exercise and pain management regimens.

Medication, physical therapy, injections, and surgery are all alternatives for treatment of slipped discs in Singapore. They include the following:

A physical therapist can advise you on postures and exercises to reduce herniated disc discomfort.

Physical treatment is not generally indicated within the first three weeks after symptoms begin since disc herniation symptoms commonly improve on their own. In certain circumstances, a doctor can provide more detailed advice.

When beginning a new exercise or physical therapy programme, it is critical to always speak with a doctor.

A doctor can use injection drugs to reduce the symptoms of a herniated disc. A nerve block is another name for this technique. Epidural injections and spinal nerve injections are two injectable treatments used by doctors to cure a ruptured disc.